In March 2020, the start of the first UK lockdown Nordic Eye Sales Accelerator (NESA) signed a distribution agreement with UVD Robots who at that time had a flat and poor performing sales environment in the UK.

We launched NESA Robotics www.NESARobotics.com and dedicated a team to introducing UVD Robots & GoBe robots into various industries predominantly in the UK including Aviation, Construction, Education and Transport. With sales exceeding $1m in the first 6 months from a standing start!

The UVD Robots were designed to significantly reduce hospital acquired infections, a significant problem in the healthcare sector, using ultraviolet light, the UVD Robot autonomously, disinfects and kills 99.99% of all viruses and bacteria on surfaces and in the air. In light of the pandemic, NESA quickly sold into Frimley and Wexham NHS trusts. 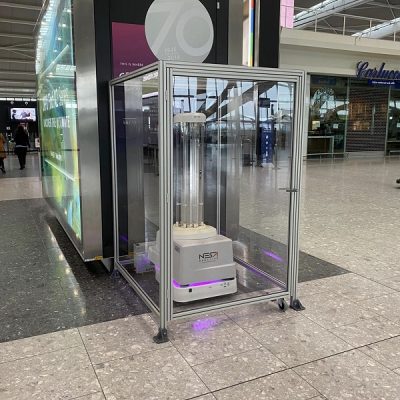 NESA then took UVD outside of its comfort zone by introducing the robots to the commercial sector, by leveraging existing contacts, we strategically secured sales with some of the world’s industry leading businesses:

During the second UK National Lockdown when schools were still open, NESA introduced the GoBe Robots. The telepresence robot was brought in to support teachers remotely, eliminating the need for Supply Teachers which found an ROI of the telepresence Robot in just 7 weeks.

By introducing various different purchase and rental options we continue to expand our client base with Facility Management companies, helping businesses across the UK get ‘back to business’ after the third National lockdown.